The Pacific Stonecrops — A Sedum of Our Own 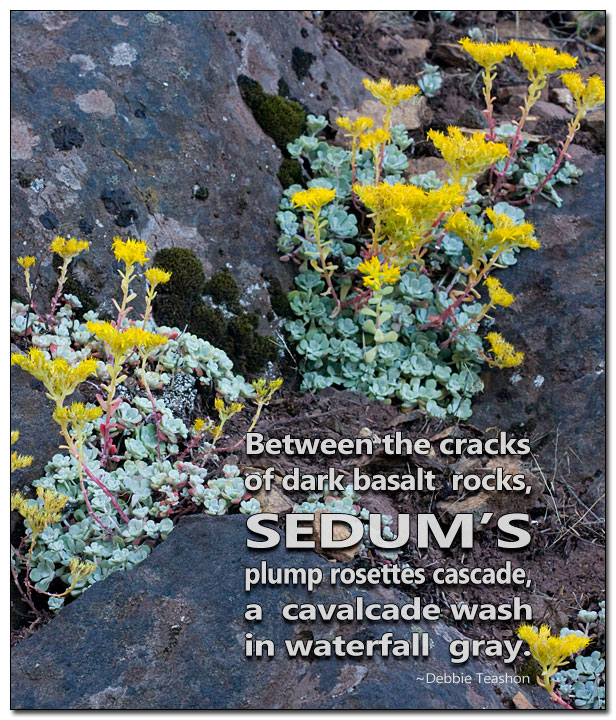 Many succulents in the sedum genus grow around the world. Gardeners love them because they are fascinating plants. Sedum spathulifolium and other species evolved to grow in difficult places in the Northwest — their water storage capabilities help them thrive when water is scarce.

For those living on the west side of the Cascade Mountains, a succulent plant with a need to store water seems a contradiction to the rainy climate. For sure, the native sedums deplore wet soil, yet place them in full sun on a dry cliff; in a crevice; or in sandy, gravelly or rocky ground, and the native sedums flourish where other plants dare not grow. They grow in these areas free of competition from other plants. The rosettes can root and cling to bare rock if need be.

According to the U.S. Department of Agriculture’s map of native plants, Sedum spathulifolium ranges from California to British Columbia coastal areas. These natives grow at sea level and as high as 5,200 feet in the Sierra Nevada Mountains and Klamath Mountains, where the leaves grow more significantly.

On Puget Sound, they grow at the south end of the Kitsap Peninsula. Also found in Port Angeles, the succulent grows in crevices on south-facing slopes and cliffs near the beach on the north side of Crescent Lake and in the foothills above Sequim. One exciting location is on a mossy rock in a river channel on the Cedar River in North Bend, Washington.

Evergreen leaves grow in a spiraling, tight rosette. Creeping stems help the succulents colonize an area. However, they are not thugs. Once introduced to your garden, you may wonder why you have never utilized them.

In the Northwest, sedums are ground-covering wonders. These low-to-the-ground perennials serve a useful purpose in the rock garden — tucked into rock walls and crevices or left to fend for themselves on dry ground. For beginners, sedums grow with ease in well-drained soil. The plants form a dense, textural carpet of trouble-free rosettes.

This plant was known to the Makah tribe as the water plant tcatca’ ‘kikI because of its fleshy leaves. They ate the fleshy sedum leaves if they suspected malicious spirits tainted their water. Other indigenous people used the plant as a medicinal for various disorders, such as a decoction for constipation or a wash for soothing nervous babies.

The succulent foliage is used in soups or even as a stir-fry. Serving this to your family or guests would get everyone talking about the strange new vegetable on the table, hopefully without an “ew” comment.

If you add the leaves to your diet, harvest them early in the morning before the CAM (crassulacean acid metabolism) processing of CO2 builds acid content in the foliage. This process adds an acid/peppery taste that makes the sedums unpalatable by afternoon or evening. Caution: Eating too many of them can cause an upset stomach.

Sedums take a light, well-drained soil in full sun. The plants adapted to growing in rock walls and crevices thrive in rocky soils. They are stress-free plants to grow, and for a beginning gardener, this is good for a successful garden experience.

Sedums are easy to propagate and increase stock using stem cuttings or divisions. Gently pull a rosette away from the plant and lay it on open soil anywhere you want it to grow. It will root and colonize an area in little time.

Choosing one sedum is hard to do when there are so many to appreciate.

Sometimes gardeners do not value native plants as much as other regions inf the world. England’s Royal Horticultural Society bestowed Sedum spathulifolium ‘Cape Blanco’ with the Award of Garden Merit. Named after the place where it grows in Cape Blanco, Oregon, this native sedum is one of the most popular stonecrops cultivated in gardens around the world.

Being a Northwest native makes it a perfect choice for this maritime climate. A silvery-white, waxy powder covers the handsome rosettes of fleshy, green leaves, giving the plant a silvery-white appearance. It colonizes as a dense, white carpet of succulent leaves.

With outstanding foliage, the yellow flowers seem like an afterthought. When the flowers put on their annual show, they smother their rosettes with bright, mustard-yellow blossoms on short racemes. As soon as the flowers fade, deadhead the flowering stems, so the foliage comes to the forefront.

You can appreciate Sedum ‘Cape Blanco’ growing in nooks and crannies along rock walls and edges of pavers (where there is little to no foot traffic). This variety is a standout cascading down dark basalt stone that shows off the perennial’s attractive, silver-gray foliage.

Another plant of note is S. spathulifolium subspecies purpureum, a sport of S. ‘Cape Blanco.’ The deep purple in the leaves shines through the white, powdery coating. Removing the sports from the parent plant, they do not revert. Similar to this, but with medium-sized rosettes, are Sedum spathulifolium subsp. pruinosum ‘Carnea,’ with a brighter red hue, and S. ‘William Pascoe,’ with a more purple-red shade.

Add any of these to the garden for an eye-catching carpet of texture and color.