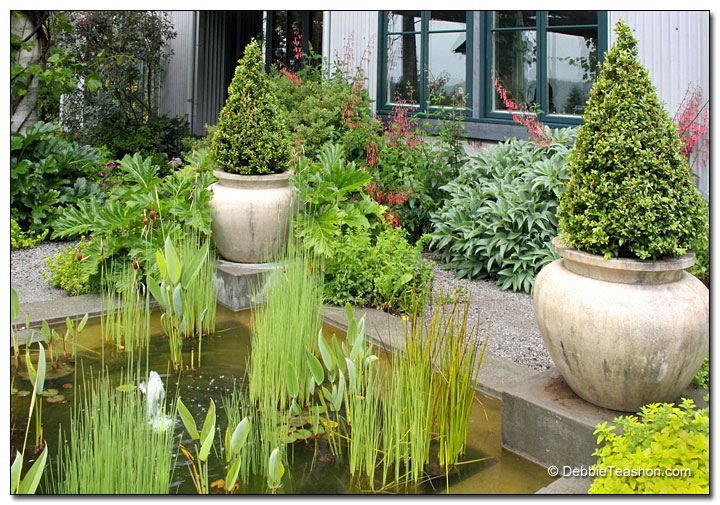 Water is life, and in the garden, especially when the water moves in a rhythmic sound, it quenches the soul. More than half of the human body is liquid. No wonder we gravitate to it. We are water; water is us.

Humans have long been attracted to the sound, the flow and the reflections of water. Many people listen to recorded water sounds for relaxation. Many take vacations to the beach to sit next to a lake or an ocean.

The added dimension water brings to the garden is the gentle sound of softly falling liquid as it flows over rocks and drops into pools. Reflection pools create a place to gather around and contemplate, meditate or pray. We slow down near a babbling creek that soothes, a soft bubbling fountain that amuses or a gushing waterfall that excites. Nearly everyone loves the sound of water.

Why not bring water sounds into the garden?

In today’s world, water sounds mask the sounds of modern life, although having a Niagara Falls sound effect in a backyard would be overly ambitious and not too restful. Fountains, waterfalls and streams effectively turn distracting noise into white noise. Fountain noise helps tune out the sound of a highway or your neighbor’s irritating leaf blower that starts up just as you are relaxing in the garden.

History reveals a long-standing tradition of adding water features to community spaces and private landscapes. Birdbaths, ponds, trickling fountains and mammoth community installations are a testament to their staying power as features in the garden.

Harborside Fountain Park, next door to the Bremerton ferry terminal, hosts a series of five hefty copper fountains that unmistakably mimic a submarine when it first emerges from the depths. The shape of the shallow pools that hold the fountains mimics ships.

Initially installed and opened as water features in 2007, the fountains and pools quickly became a favorite wading pond for children and adults during hot weather. The fountains flow intermittently between trickling streams to geyser-like spurts. Bremerton Parks and Recreation refitted and plumbed the fountains to accommodate human aquatic use. The five pools are now sanitary for those who wish to wade. The entire installation in a lush landscape is a brilliant tribute to a town that hosts the Navy on its shores and is a destination point in the city.

Adding Water Features to Your Garden

Water features most likely don’t come in such colossal proportions for the average home garden. However, there are many styles of fountains and ponds to fit in with any landscape. Any imaginative person can create a water feature out of found objects. Anything that can hold water or flow water is a likely candidate.

Adding water to the garden begins with an initial first step. A shallow ceramic dish filled with water and floating glass balls is simple enough. A birdbath placed as a focal point is nearly uncomplicated and an entertaining bonus when watching the feathered friends use it.

Water features are often functional as well as artistic. Fashioned from bamboo, the shishi-odoshi fountain (Japanese for deer scarer) origins came out of the need to scare deer away. Typically found in a Japanese-style garden, the deer scarer also fits in naturally with many Northwest landscapes.

The hollow spout fills with water pumped from below and dropped into the hollow tube. When full, the liquid weight drops the spout forward, empties the load, and hits against something like a rock or bowl.

In the Jackson Meadow Garden, a shishi-odoshi’s spout hits a rock as it empties the water load with a distinct clacking noise.

The water then flows down into a bowl, where it overflows into a catch basin hidden under the rocks. The surrounding garden is planted in a mass of Japanese forest grass (Hakonechloa macra ‘Aureola’) that appears to flow down a slight incline like a grass waterfall.

A disappearing water feature means the water-holding apparatus can be anything from a watertight basin sunk into the ground to a hole dug and covered with a pond liner. The pool with the pump hides under rocks while the water disappears into it. Large or small pots turned into water features stand at ground level on top of concrete blocks.

Natural-looking waterfalls are probably the most complicated to achieve, especially with a flat property. Patty and Leonardt Pecchenino’s garden has a slope reaching down almost to their front door. A waterfall perfectly nestled into the hill is artificial, yet it looks like a natural phenomenon. Instead of a large lawn, the falls empty into a large pond you walk by on a concrete deck to the front door.

There are so many styles of fountains and creative ways to use them in the garden. It is easy to find a style that matches the garden. Water sculptures often used to move liquid in artistic ways, come in many shapes and sizes. A wall-hanging or tabletop fountain trickles soft sounds near a favorite place to sit and within reach of an electrical outlet to run the pump.

In a garden created by Iftikhar Ifti, who designs gardens around the globe, including Puget Sound, there is a modern-style metal sculpture shaped into three broken circles nestled inside each other. The water completes the ring with several streams of water coming out of each one. Light bounces off the metal and changes the hues of the metal throughout the day.

Adding a water feature to a garden may not add monetary value to a home. Nevertheless, it adds a place for tranquility, which is priceless.

Azolla is a tiny, true fern that turns red in spring and fall in cooler temperatures and green in the heat of summer. It quickly covers the top of any size body of water, whether a pond or container. When the water becomes too crowded, it is easy to scoop out access plants and throw in the compost or use as a strange-looking mulch under garden plants. Fairy moss fixes and stores a lot of nitrogen from the air with the help of symbiotic cyanobacteria. The fern also controls algae by reducing the amount of sunlight that reaches the water.

In smaller bowls, dwarf water lilies (Nymphaea pygmaea) do not need as much depth as the standard-size water lily and fit into smaller, confined water spaces. Many larger plants in containers sunk into the water — taro or elephant ears (Colocasia) and many Canna lilies thrive in shallow water.