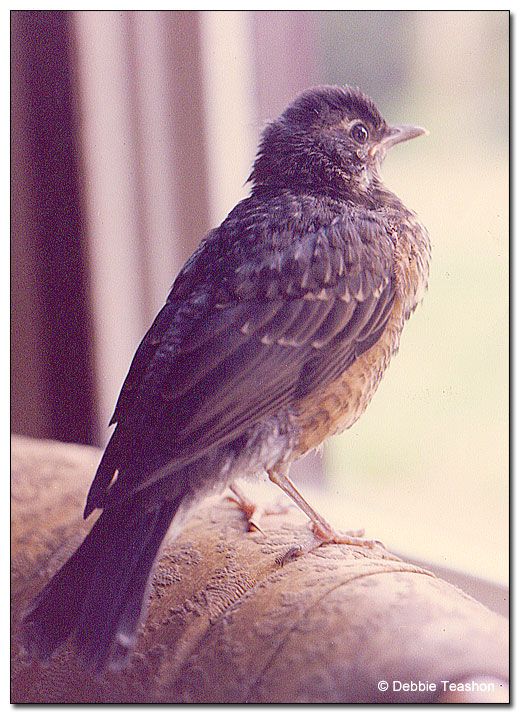 This story is about letting go. At the time, I had no idea that a baby robin would someday symbolize that no matter how much I want to hold on to something, the time comes when I have to move on.

A little robin is etched in my memory as this photograph of him peering out the window. On a warm spring day in 1975, I found a baby robin on the ground in my garden. I looked up into the surrounding trees but couldn’t find its nest.

As a child, I had many a heartache from trying to help baby birds. They died, despite my best efforts to save them. They were small and featherless, too tiny to survive. The parents likely kicked them out of the nest because the baby had something wrong with it. The fallen bird looked strong and had some feathers, a good sign the young one was old enough to survive.

Although nature is brutal, I had high hopes that this baby bird could be saved. I took it into the house and called a veterinarian for advice on caring for the little tweeter. We didn’t have an animal rescue or wildlife sanctuaries to care for injured or sick creatures back then.

I followed his recommendations, even though I had misgivings. I purchased a large syringe and filled it with the mixture, grateful that I didn’t have to dig worms and mash them every time I fed the little one.

The robin looked up at me with soulful, little eyes. Did he wonder if he was going to have lunch or be lunch? I touched the syringe to his beak, and he opened his mouth wide. I syringed the appropriate amount of food into his beak.

Then he pooped. This prompted me to quickly find a deep cardboard box, line it with a towel, and place him and his new nest in the spare bedroom. That is where my little guest lived while under my care.

As his surrogate mother, I fed him faithfully every two hours. Every time I went into the room, I whistled. The baby quickly learned my signal for feeding time and peeped up a fuss until he received a gullet full of food. As soon as he finished eating, he pooped and quietly settled back into his towel nest until the next time.

I fell in love with his heart-warming response to my whistle. He grew, and his feathers filled in nicely. I let him sit on the back of a chair and look out the window during the day. One day I took him outside, and to my surprise, his parents swooped down close by and chattered at him. He answered.

After sitting him on the ground, and I backed away, his parents fed him! Being too young to fly, I couldn’t leave him in the garden. I took him outside every day, sat him on the ground, and retreated a short distance. I watched over him to keep him safe from predators. The parents swooped in and fed him goodies they gathered for him.

Eventually, the baby bird took flight and flew into the trees. I recognized his chirps even when I couldn’t see him. When I whistled, he returned, and I took him back to his nest in the house. I wasn’t willing to let the parents take complete care of him, afraid he might not make it.

We did this routine for a few more days, and then one day, he didn’t return. The day he took his freedom and never returned was a sad day for me. I heard him talking in the trees, and I whistled for him, but he wouldn’t return. He achieved the ultimate goal to live and fly free, and I had to let him go.

It’s funny how fond I became of that little creature. Before I stopped calling the now-grown robin with a whistle, a long time passed, and even longer before I stopped listening for his voice in the trees.

Years later, I thought of him as the dog-bird because he ate dog food during his young life and came back to me when I whistled.