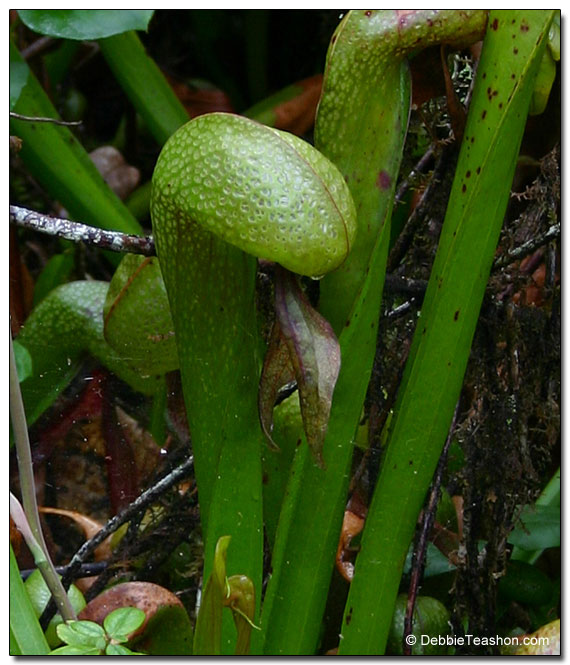 On the threshold of Halloween, it only fits to tell a few flora horror stories. These stories may sound fictional, yet spooky and true.

The story begins innocently enough with a small bog garden planted with carnivorous pitcher plants (Sarracenias). I spy a handsome admiral butterfly tap dancing on the edge of a pitcher plant tube. With a wingspan too large, she cannot crawl inside.

She teeters on the edge of a death trap, sticking her tongue out at the danger. The butterfly unfurls her tongue and steals the pitcher’s nectar.

Come in closer and listen carefully, if you dare. When you do, you hear the distressed cries of other insects not so fortunate, trapped in the plant’s interior, dying. Inside the tubes, there are layers of dead insects piled up—the live ones at the top of the pile buzz in desperation. There is no way out.

Do you hear the tense music build up? This poor creature is about to encounter the monster.

Much like a victim in horror movies, it does not heed the warnings. Not satisfied with the little bit of nectar on the edge of the opening, a greedy little fly bravely steps inside the plant’s hood in search of more.

Once inside the cobra lily’s hood, it sees hundreds of translucent windows in the ceiling above. The poor thing cannot find its way out.

Panic sets in—the fly bounces around inside the hood, desperately seeking a way out of this circus house of mirrors. He cannot land anywhere on the hood, for it is covered in a slippery, waxy substance. The exhausted fly tries to land one more time, slips and falls into the tube. Once inside, downward-facing, razor-sharp hairs prevent him from crawling back out.

Liquid covers the bottom of the tube. The fatigued insect eventually falls in and drowns. Its body sinks and comes to rest on a stack of previous victims. (In a horror movie, the fly would sink in slow motion as a dramatic conclusion to the scene.) The finale is the plant digesting the softer parts of the fly’s body—turning it into nitrogen for nourishment.

The stories get worse—try not to scream!

In the Northwest, a tiny plant grows. Pinguicula vulgaris is its proper botanical name, yet commonly called butterworts and affectionately called pings by growers. This horrid little monster comes packaged as a charming little plant with a tiny purple blossom.

Butterworts are widespread around the world in North America, Europe, and northern Asia. The rosette of yellow-green leaves only grows four to five inches across.

If you see seepage around rocks or other wet places, look for these diminutive monsters. Their tiny leaves are pressed close to the ground. Touch the leaves and note a buttery or greasy feel to them. Look closer. Do you see the tiny little gnats stuck to the leaves?

When a gnat or other tiny insect lands on the butterworts leaf, it is immediately stuck. As the victim struggles, it pulls more drops of glue from the leaf glands.

That is not the horrible part. Another set of glands secrete a killing liquid of enzymes and acids. In a few hours, the soft tissue of the gnat is dissolved. The remaining parts turn into a pulp. The glands absorb the insect’s fluid and are nourished.

Be on the lookout for our native round-leaf sundew (Drosera rotundifolia), which sometimes accompanies the butterworts and are even more insidious. Imagine if you will little round leaves covered in tentacles. On the end of each one of them is a small, red gland that secretes a drop of dew.

Now imagine yourself an insect, and you catch a glimpse of the sparkling droplets. You think it is nectar and fly in for a sip. You land on the sundew leaf and immediately become stuck! You struggle and contact more glue; the dew now glues more parts of your body.

In horror, you watch tentacles on the leaves move towards you and the edges of the leaves curl inwards. You feel the burning acids and enzymes on your skin as it slowly sucks you dry.