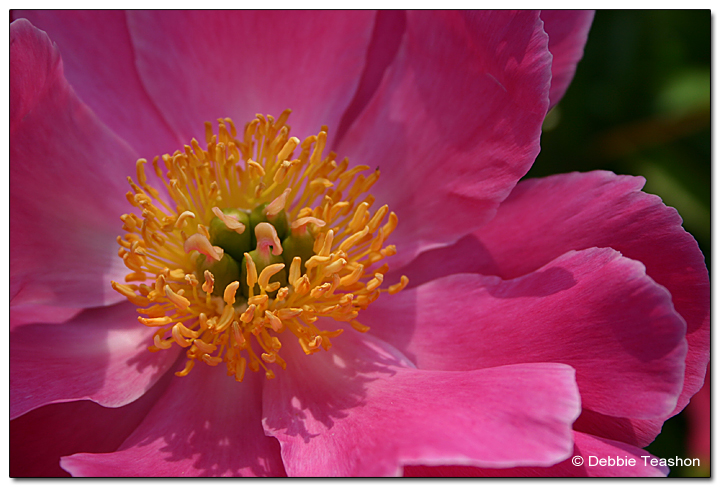 One day, the Greek goddess Aphrodite caught Apollo flirting with a shy, beautiful nymph named Paeonia. When Paeonia realized the goddess was watching them, her face flushed a deep rose-red. Aphrodite turned the blushing girl into a rose-colored peony in a fit of jealous anger. According to Greek mythology, modern gardeners owe thanks to their ancient gods for the peonies that continue to blush in our gardens today.

Paeonia’s botanical name comes from the root paean, a hymn of praise to a helping god, or derived from a physician’s name to the gods. The name meant healer.

The Japanese called peonies the flower of June that brought happiness and marriage, while the Chinese believed it brought prosperity. European colonists loved the plant enough to bring it to the New World, and Victorians thought it represented shame and shyness.

Today, the plant shows no sign of going away. Although threatened in the wild in locations worldwide, peonies are here to stay in gardens.

There are three classifications of peonies: herbaceous (perennial), tree (shrub) and ITOHs (intersectionals). Tree peonies have fewer cultivars to choose from yet are highly sought after as a specimen shrub for the garden.

A more recent group bred in 1949 is a cross between the tree and herbaceous peonies. The intergeneric cross gave new colors of brilliant yellow and orange to the herbaceous plants.

Both the herbaceous and ITOHs die back to the ground every year, sprout the following year again and quickly grow to bloom size by mid to late spring. The ITOHs have stronger stems and are less likely to flop to the ground under the weight of the large flowers.

Jim and Ann Mossman owned the peony nursery Boonebriar Farm in Kingston. Even though they have retired from the nursery, they still grow peonies in their gardens.

Some remember the old-fashioned flowers from their grandmother’s garden that remain popular in modern-day landscapes. Their large flowers, fragrance, and easy care make them popular plants still sought after.

The plants can live for 40 years in the garden. Some well-documented specimens have lived over 70 years.

The brilliant flower hues and large blossoms make peonies famous for cut flowers. When the fuzzy bud sheath begins to split open, and the bud shows the flower’s color, it is time to cut them. Gardeners harvest the entire stalk by giving a sharp tug to the side so that it breaks off at the crown. The tips of the stems are then scalded in hot water to reduce the sap flow. The flowers last up to seven days in a vase.

As charming as peonies are, they don’t take a lot of effort to grow. With the exemption of staking herbaceous peonies correctly and planting at the proper depth, the plants need very little care. Appropriate planting depth and good air circulation around the plants are essential considerations.

At Valley Nursery in Poulsbo, nursery manager Terri Mitchell shared that the No.1 reason why peonies won’t bloom. The crowns are too deep or covered with too much mulch. Plant the bare roots no deeper than 2 inches. For potted herbaceous peonies, she recommends planting a half-inch deeper than the soil level in the container.

Plant grafted tree peonies 4-inches deeper than their graft so that the plants will grow on their own roots instead of the temporary grafted roots. Give your peonies plenty of elbow room, as they need good air circulation to prevent gray mold (botrytis).

For herbaceous peonies that flop under the weight of their blossoms, you can use green bamboo stakes around the perimeter of your plants and tie them with green twine before the plant opens its heavy blossoms.

Alternatively, use metal stakes with bendable arms to help contain the plant and keep upright when the weight of the flowers wants to bend the stems to the ground. Take care when setting stakes to keep from spearing the roots.

Most likely, you will notice ants on your peony buds before they open into flowers. Some believe that ants are required to help the buds open; however, this isn’t true. The ants are attracted to the sugary nectar produced by the flower buds. The ants don’t hurt the buds or blossoms and disappear soon after the flowers open, so no insect controls are necessary.
Your peony is a long-term investment that needs proper planting care. These plants can live 40 years or more around your home. Prepare the garden ahead of time and plant them in an area that receives six or more hours of sunlight a day. Dig a hole at least 15 inches deep and 30 inches wide and away from tree or shrub roots competition.

Peonies can tolerate the typical acidic soil west of the Cascades; however, for optimum growth, the plants prefer a soil pH 6.0 to 7.0. At planting time, throw three heaping handfuls of lime into the planting hole and mix with soil.

Drought-tolerant once established, your peony will grace your garden for decades to come.

Initially written for the West Sound Magazine, the article appeared in the magazine’s 2014 summer issue.