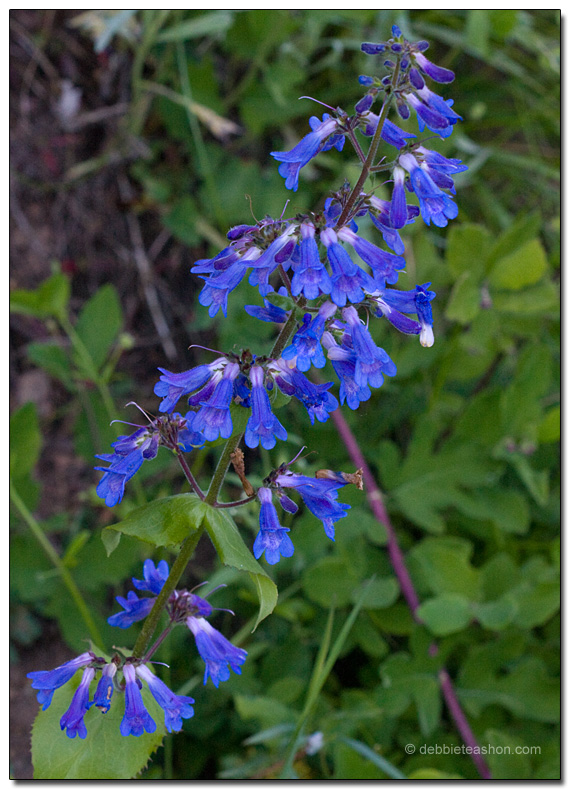 What can be said about the genus Penstemon, commonly called beardtongue? Plenty!

The genus Penstemon has a vast collection of flowering plants endemic to North America, with more than 250 species claimed. Every state has native beardtongues residing within its boundaries, and almost all are growing in the west. If you wanted to cultivate a genus of plants, you could choose from a large selection of Penstemon species and cultivars.

Beardtongues have a wide range of showy plants. If you have a rock garden, there are penstemons for that. You want an excellent hummingbird and bee plant; penstemons will be your wing-men. You want a long-blooming perennial for your summer garden; you are covered.

Most penstemons are easy to identify their eye-catching, tubular flowers with flaring lips—two lips on top and three lips on the bottom.

From mid to high elevations in the Olympic, Cascade, and Sierra Nevada mountains, Penstemon davidsonii is a low-growing perennial that spreads by creeping, woody stems and can grow in a rock garden.

Penstemon ovatus (top photo above) grows from British Columbia and reaches down into Northwestern Oregon. From Alaska to Oregon, this beardtongue thrives from the coast and up high in the Cascades.

Penstemon serrulatus grows in seeps, near streams, or moist rocky sites. The blue and purple blossoms flower in whorls along the stems.

Border penstemons also referred to as garden penstemons, come in a large variety of cultivars. In England, four to five species came over from North America and were used in Europe’s hybridization programs. Yet in a 1955 Bulletin of the American Penstemon Society, there came a plea to breed better Penstemons, believing it would make them a more popular genus.

Some hybrids that came out of breeding programs are phenomenal, with cultivars ranging from scarlet to purple flowers and even newer varieties with maroon almost black foliage and stems.

Unfortunately, many beardtongues are short-lived.

Some of the older cultivars are still here because they perform well in the garden. Penstemon ‘Andenken an Friedrich Hahn’ (also sold as P. ‘Garnet’) has been cultivated since 1918. This old Dutch penstemon cultivar is one of the most successful ones in the trade. The tubular, wine-red flowers make it a favorite of hummingbirds. Even without deadheading spent flowers, this cultivar is notably floriferous, blooming all summer up to the first frost.

Another favorite variety is Penstemon ‘Sour Grapes’. True cultivars have violet and metallic blue hues. It is hotly debated amongst enthusiasts which ones sold in the trade are the truly P. ‘Sour Grapes’. Some claim it’s been many years since the last true one sold.

I don’t know if mine was true or not. It is purple with blue tones. I wouldn’t call it metallic blue, but it is blue nonetheless. So, while they hotly debate what is true or false, I will continue calling it ‘Sour Grapes’—fitting for a controversial plant.

Take a closer look at Penstemon ‘Dark Towers’, and you notice fine silvery hairs contrasting the dark stems and leaves.

Out of the University of Nebraska came a tall, dark, and handsome newcomer to the trade (2008)–Penstemon ‘Dark Towers’. Its deep maroon to almost black foliage had gardeners taking notice. Pale lavender to pink flowers stand out against the dark foliage. When it sends up its spikes of flowers, this perennial is three feet tall and stately. Take a closer look, and you notice fine silvery hairs contrasting the dark stems and leaves. The stems tend to be floppy, so staking may be necessary.

Well-grown Penstemon ‘Blackbird’ is known to carry up to 75 flowers per stem.

Another floriferous and tall beardtongue variety bred in England and easily found in nurseries is Penstemon ‘Blackbird’. Red stems carry the tubular, deep reddish-purple flower and darker buds. Well-grown specimens are known to carry up to 75 flowers per stem.

Penstemons are excellent as cut flowers. Harvest the blossoms after half of them open. The flowers will last up to a week or more in the vase.

Well-drained soil is necessary for beardtongues. Fertilize at planting time and then forget about adding any more. Over-fertilizing is not recommended, or you will end up with too much winter dieback and shorter living plants: the less pampering you do, the better life for these perennials. However, fertilizing them will increase their flower production. The tradeoff is having to replace your plants sooner.

Most of these garden selections grow two to four feet tall and look better in massed plantings of three, five, or seven plants.

After the first flower flush fades (say that ten times fast), cut the plant back to side growth. In late summer to early fall, the second round of flowers will reward you with more color. Some supplemental watering is necessary during our drought for most cultivars.