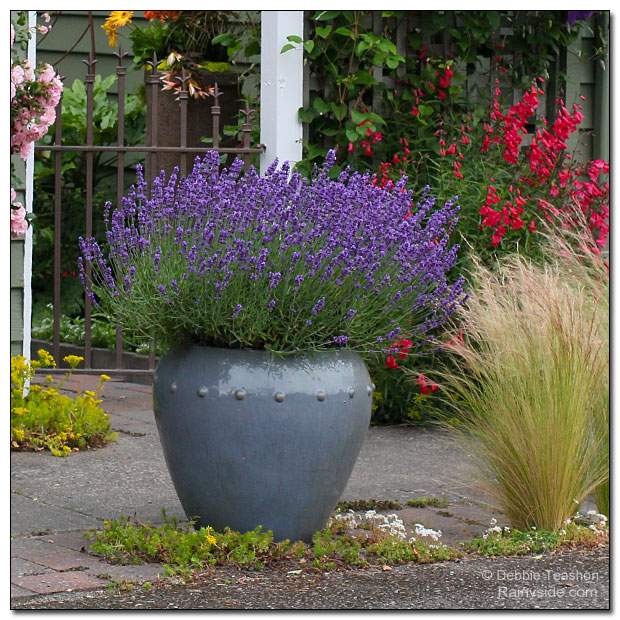 Downsizing a garden to a manageable area does not mean you give up on charm. In fact, small plots are often more creative in utilizing space. Suzanne O’Clair and David Shelley have one of those places. Though the property may be small, the landscape is designed extensively with inspired elements.

Over the last 18 years, O’Clair and Shelley transformed a barren plot of land into a heavenly garden retreat. With their creative talents sprinkled generously across the property, the couple’s willingness to maintain and let the garden evolve has resulted in an effective use of space.

When O’Clair downsized to a smaller home and garden, she went from an established half-acre property to a tiny plot measuring just over 3,000 square feet, made even less with a townhouse condominium sitting on most of it. Her goal was a place she could easily maintain when it came time to retire.

Initially, the landscape had a surround-lawn, one beautiful maple tree, and a concrete sidewalk. The skinny walkway shot past a row of sickly camellias and rhododendrons growing in a narrow bed next to the garage. One direction went to the garage door, and the other continued up to the porch. Past the garage, the path formed a Y.

O’Clair asked me to help her with the initial layout of the new garden. We tackled the townhouse’s problem built over the old Poulsbo High School football field, with a sorry mess of about an inch of deplorable topsoil covering a slick clay sub base.

First, the sidewalk came out. Then the stripped lawn was turned upside down and placed in the marked garden beds. O’Clair invested in a massive load of compost to improve the existing soil. She adds compost mulch nearly every year, and now the soil is loose and crumbling — a haven for earthworms that constantly till the ground.

The initial concept for an Italian-Mediterranean garden evolved into an eclectic, “English-country meets the Mediterranean” style.

The front garden, divided by a substantial arbor, became two rooms, making the small garden appear more significant. All visitors pass under the plant-laden arbor on the way to the front door. The structure functions to give vertical space for vines. Growing upwards is the key to producing more plants in a small garden.

Lily of the valley shrubs (Pieris japonica ‘Forest Flame’) flanked the deck and provided a private area with a living wall.

O’Clair’s commitment to investing in functional structures and selecting many plants that look good every season means that her garden looks fantastic no matter what time of year it is.

Initially, she began with the front yard, and over the years, she and her husband worked their way around to include a backyard oasis.

A narrow patch of open ground was outside the garden gate, sandwiched between hot pavement for cars to park on and a sidewalk. Often referred to as a hell strip, it is a dry, overheated place for weeds. O’Clair found a solution to the awkward space. She bought three matching containers and lined them up in the strip.

“I never met a sedum I didn’t like,” O’Clair often says.

Inside the containers, she planted heat-loving English lavender (Lavandula angustifolia). She replaces them every few years before they become gangly, woody shrubs.

A pink rose climbs the gate entrance on the sidewalk’s other side. The only plant that remained after O’Clair took everything out. Most of the plants selected for the same area are drought-tolerant.

Penstemons and sedums rule the fence line. O’Clair planted Penstemon ‘Garnet’ — a rosy-red beardtongue — one of the most persistent blooming varieties in the Penstemon genus.

Stepping inside the gate, you enter another realm. The garden behind it is teeming with foliage and flowers. On the left side, a crescent-shaped garden surrounds a sizeable brown container overflowing with attention-loving plants. O’Clair packs them in, leaving little room for soil to show.

She keeps her weeding chores down by shading out the undesirables with the established flora. Clematis, hydrangeas, and roses anchor the garden on one end, while edible plants take up the middle section. Blueberries (Vaccinium ‘Sunshine Blue’), an unknown variety of fig trees, and an espaliered pear tree rub elbows with ornamental plants. Cupressus macrocarpa ‘Wilma’ anchors the garden near the arbor.

On the other side of the garden room, next to the garage, sits an unusual metal bench designed in the spiral shape of a nautilus shell. Flanking both sides of the seat are gardens packed with plants that do well in the shade. O’Clair found the garden bench in Canada and made a special trip back across the border to retrieve it.

Anchoring the arbor side of the garden is a lace-cap hydrangea (Hydrangea ‘Twist-N-Shout’). On the other end, the small garden relies on foliage and texture for interest in the bed. O’Clair plants a long cylinder pot with exuberant annuals for a spot of color in summer.

With a small home and property, the couple is creative in utilizing every inch of space. When Shelley moved in, the garage became his woodworking shop, where he designs and custom-builds guitars and ukuleles. Shelley used his talents in the backyard to create and build a 15-foot wooden sailboat.

Once they launched the boat, the pair turned the back area into an entertaining space. O’Clair found two perfect-size sheds to fit into the small backyard. One of the buildings they affectionately call Chester is where they store seasonal items, garden tools, and other essential things that one typically keeps in a garage.

The other shed becomes a multifunctional building during warm weather. The couple uses it for entertaining in the garden. When guests gather, the French doors swing open to become part of the party, where refreshments sit on the counter and table. O’Clair also utilizes the shed to do her custom jewelry work or write her “O Stars Above” astrology column (ostarsabove.com).

Continuity of materials is a necessary design element in a small garden, so after installing the sheds, O’Clair and Shelley used the same pavers in the back courtyard. Three small garden beds, now filled with plants, surround the paved area. It expands the living area with windows and doors that look out both sides of the house into the garden.

On the backside of their condominium, a trellis is an extraordinary work of art correctly scaled to break up a blank, two-story wall. A copper art piece is the center of attention when the Avant-garde clematis vine (Clematis ‘Evipo033’) is quietly out of bloom. Tied to the lattice underneath the copper is an aralia ivy (Fatshedera lizei ‘Aurea Maculata’) with fabulous evergreen foliage.

Flanking either side of the trellis are two large terra cotta pots, each housing a sky pencil holly (Ilex crenata ‘Sky Pencil’) as exclamation points to space. In front of the lattice, Shelley custom-built a sturdy table to hold a large slab of Italian marble that O’Clair has held onto for many years. Two metal bar stools pull up to the table.

Shelley remarked about maintenance in the garden, “We don’t need mechanical tools here, which means no gas and no noise is necessary to maintain our garden.”

With a mature garden packed tightly with flora, Suzanne O’Clair and David Shelley will have to wait for a plant to die before they can put in anything new. The alternative would be to remove any established plants to open up space for their next creative adventure in the little big garden. Talks are underway.