TRENDING NOW
Stories Aquilegias Could Tell
The Hardy Fuchsias
Rebel
A Beachy Summer Getaway with Music in the Gardens Tour
2020 New Plants for a New Year (and 2022)
Peace in Motion
The Hardy Fatsia Japonica with a Tropical Flair
Butt too big?
Green pot, made in the shade
Dress Up the Summer Garden

When the Kousa Dogwoods Bloom the Northwest Takes Notice 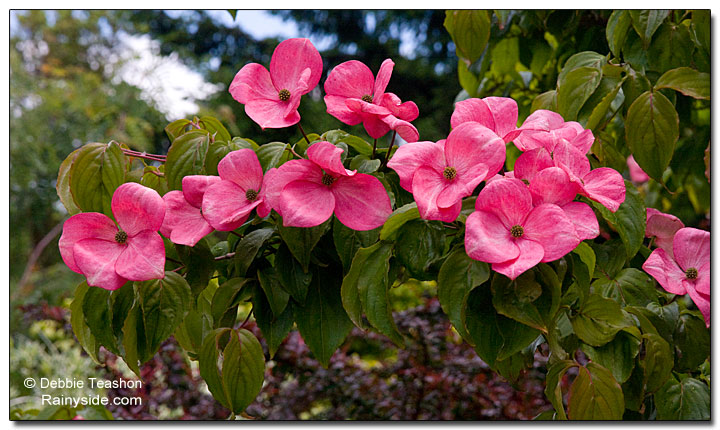 When the Kousa dogwoods bloom from May to June, the world takes notice. This region needs to turn away from the popular, prone-to-disease, ornamental cherry trees and turn to some great trees Cornus kousa. Imagine walking down a dogwood-lined street when these elegant species are in bloom. It would be a horticulture dreamscape, turning a neighborhood or town into a floral wonderland for three to four weeks out of the year.

People adore dogwood flowers and form. Artists paint them on canvases, and homeowners plant them in gardens. Considered a four-season plant, Cornus kousa is a broadly conical, deciduous tree. When the flowers swing into full showoff mode, the trees smother their branches with large, star-like flowers. The showiest part is not the flowers, however. Four large, floral bracts commonly mistaken for petals surround tiny, inconspicuous, yellow-green flowers. It is all about the bracts for these Asian beauties.

Yet, the beauty does not stop once the flowers fade. Considered by enthusiasts as one of the most desirable trees for Western gardens, Kousa dogwood provides four seasons of interest in the landscape. Its cultivars have some of the most prominent bracts and fruit in the genus. Its dark-green leaves with wavy margins are easy to identify as dogwood. The foliage carries the plant through summer, providing shade during the dog days of summer.

The dogwood gives another seasonal show in autumn, when the leaves turn a glorious, deep crimson to purple and the strawberry-red fruit dangles from the branches. Once the leaves and fruits fall, it is the bark’s turn to show off its mottled, exfoliating, tan-and-gray bark.

In the history of the Earth, the genus Cornus has been around for a long time, dating back to when dinosaurs ruled the world. Many species in the genus populated the Northern Hemisphere, and the species C. kousa grew in Korea, China, and Japan.

The name Cornus comes from the Latin word cornu, which means horn. Some acknowledge that the name is a tribute to the density and strength of the wood. The epithet kousa is the Japanese word for dogwood.

The common name dogwood has nothing to do with dogs. Europeans originally called the plants whippletrees, which evolved into dog trees and eventually dogwood. Some language experts believe the common name is attributed to a misspelling of dagwood — primitive weapons such as darts and arrow shafts made from a hardwood called dags.

Crosses with other species produced many fine garden-worthy specimens. The species will reach 20 to 30 feet and 15 to 30 feet wide, although some cultivars are smaller in stature.

“It is always encouraging to find one’s plants reproducing themselves naturally, as it shows they made themselves at home,” British gardener Norman Hadden once said. Growing our native Pacific dogwood, Cornus nuttallii, he spotted a seedling growing under it in his English garden in the late 1950s. Hadden speculated the small plant was a cross of C. nuttallii and a C. kousa that grew nearby. The semi-evergreen shrub bloomed profusely in early summer, with star-shaped flowers opening white and maturing pink. The shrub covered itself in red fruits in the fall.

In 1968, the tree exhibited under the name Cornus ‘Porlock.’ Meanwhile, Hadden found another notable seedling, which later showed as ‘Norman Hadden.’ Both trees were similar, making botanists question their origins. Neither variety came from the Northwest native dogwood as once thought. Both varieties’ parentage came from C. capitata and C. kousa.

Cornus kousa is a dweller of moist, fertile forests, yet it will grow in full sun to partial shade. In a garden setting, they will thrive in humus-rich, moist, well-drained, fertile soil with an acidic to neutral soil pH.

Cornus kousa is relatively free of disease. The Asian dogwood is spared from outbreaks of Discula spp., an organism responsible for the dreaded dogwood anthracnose. The disease plagues the Northwest native C. nuttallii and East Coast native C. florida.

Except for Cornus kousa var chinensis, which is highly susceptible to the disease, C. kousa has few outbreaks. The disease remains as foliar lesions, which do not kill the species cultivars.

Because dogwood trees throw water sprouts easily, pruning is a tricky business. Prune too much, and your tree will grow numerous water sprouts from each cut. When planning your garden, place your tree where it can reach its potential full size without pruning.

Originally written for the May/June 2018 edition of West Sound Magazine.