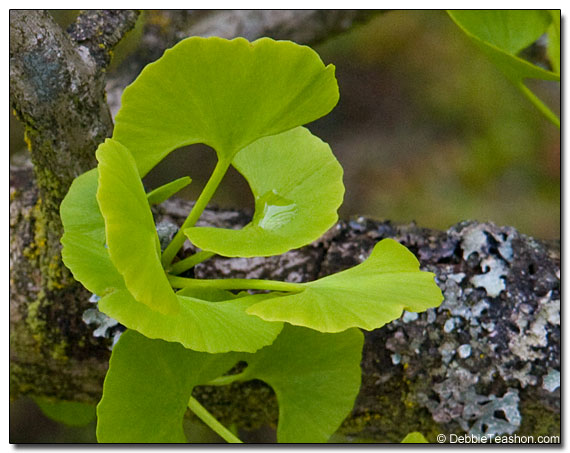 Under the tree’s tall canopy, the dinosaurs roamed. It is not hard to imagine these majestic beings rubbing their skin across the tree’s craggy bark to scratch an itch from time to time or stretching long necks to reach the leaves and seeds.

Yet this is not a fairy tale. Instead, Ginkgo biloba earns the name survivor after growing over 200 million years ago, making it possibly the oldest living seed plant alive today. Darwin called the Ginkgo a “living fossil.”

At one time, the ginkgo family was a dominant group of flora. However, the Ice Age wiped out all the wild trees from the Western Hemisphere. Ginkgo biloba, commonly known as maidenhair tree, is the only surviving species in the genus in the Eastern Hemisphere.

More misfortune came when the number of trees declined after dinosaurs became extinct. Some believe the ancient animals spread the seed. Today, the tree is growing wild in two areas in China.

Until recent discovery, the tree was thought to be extinct in the wild. Before that, many believed that Buddhist monks saved the tree from extinction. Monks consider ginkgo trees as sacred and plant them in their monastery gardens to link the prehistoric past to today.

However, there is an authenticated wild population of the maidenhair tree. In 1914, one tree was found growing naturally in one province in China, and more in Wuchuan dispelled the belief that ginkgos no longer grew on the planet. In addition, the Arnold Arboretum in Massachusetts verified the population around the turn of the century.

The tree remains unchanged over millions of years. Ginkgo biloba’s long, rich history reaches into modern times. The tree was absent from the Western Hemisphere for eons until, in 1784, William Hamilton brought a tree over from England and planted it in the Woodland Cemetery, near Philadelphia, Pennsylvania.

The Japanese consider the trees bearers of hope. One tree grew next to a temple located 1.5 kilometers away from where, in 1945, the United States exploded an atomic bomb over Hiroshima. A single ginkgo survived the blast that destroyed the building next to it. The community rebuilt the temple with stairs surrounding the surviving tree. An engraving proclaims, “No more Hiroshima.” Three other ginkgos survived the blast on that fateful day and continue to grow.

The name comes from the Chinese word ginkgo, meaning silver apricot, which describes the seed. Biloba is Latin for two-lobed, representing the leaf that is fan-shaped and split in the middle.

The Ginkgo’s common name — maidenhair tree — came about because its fan-shaped leaf resembles a maidenhair fern’s distinct foliage. Clusters of three to five alternate leaves or single leaves on long shoots are fan-shaped and two to three inches long and wide.

In spring, the new leaves are bright green. When the chlorophyll retreats from the leaves in autumn, they convert to a rich, golden-yellow hue. The foliage then hangs on the tree for a lengthy time, sometimes as late as December. Then the tree quickly and cleanly lets the leaves go, carpeting the ground in gold.

Maidenhair trees transplant easily and thrive in the Pacific Northwest. Although young trees have an awkward, lanky period, they outgrow the gawky stage as the trees mature. Therefore, it is not advisable to prune young trees, as they will not grow.

If you want fruit, you will need to plant both a male and a female tree. Be forewarned. There is no delicate way to describe the odor of a ginkgo’s rotting fruit — the stench is like vomit or poop. If you don’t want fruit, plant a male tree. Choose a named clone, not a seedling, to ensure you receive the correct gender. Note that it is advisable to plant male trees along the street. Regrettably, some cities planted rows of these beautiful trees — male and female — along their roads without regard to the fruit mess and the gross, rotting fragrance every year.

The flowering period is in early spring. Male flowers are 1-inch-long catkins. Female flowers are 1.5- to 2-inch long pedicels bearing one or two green ovules. When pollinated, they turn tan to orange and produce a 1- to 1.5-inch long seed with a fleshy, plum-shaped covering.

Ginkgo biloba makes excellent street trees, provided there are no overhead power lines. The exquisite foliage resists insects, while the tree is impervious to drought, fungus, disease, and air pollution.

Medicinally, Ginkgo biloba was used for thousands of years to treat many ailments. Today, the Chinese use it to strengthen the heart and lungs and treat inflammation. In addition, Germany approved the use in treatments for Alzheimer’s. Although the treatments do not cure the disease, it helps treat the symptoms.

Chinese and Japanese use the seeds for other medicinal and culinary purposes. Many people take Ginkgo biloba pills to help strengthen their memory.

The maidenhair tree is a survivor. Some trees grow to be 3,000 years old. So planting one is establishing a legacy that will last for many eons.